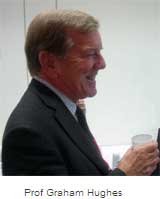 This autoimmune disease with multiorgan symptoms was described in 1983 by Prof. Dr. Graham Hughes in London. It is characterized by excessive clotting (thrombosis in blood vessels) of blood, leading to a lack of oxygen supply in the affected organ. A thrombus can form in arteries (vessels carrying oxygenated blood) or veins (vessels carrying de-oxygenated blood) of any size – small or large. Phospholipids are essential constituents of membranes of various cells, including those circulating in the blood. Platelets are the main cells responsible for blood clotting.

Antibodies to phospholipids attack membrane phospholipids in platelets and other circulating cells and increase the risk of thrombosis. Not all people with antiphospholipid antibodies (APLA) develop thrombosis. It seems that some factors like infections (HIV, Hepatitis C, and few other viruses) trigger clotting events in these cases. 40% of antiphospholipid syndrome (APS) cases are associated with various autoimmune diseases, especially systemic lupus erythematosus (SLE), Sjögren’s syndrome, and rheumatoid arthritis. Drugs (chlorpromazine, hydralazine, procainamide, phenytoin, quinine, etc.) and diseases (diabetes, sarcoid, and cancers) can also lead to elevations of APLA in low titers.

Clinical Features
As blood circulates through the entire body and supplies oxygen to every organ, APS can manifest with various features with enormous variations. The most frequent ones are listed below.

APS can be catastrophic in about 1% of patients leading to simultaneous failure of multiple organs within a few days. Such an event can be triggered by intercurrent infections, delivery, surgery, drugs, or a flare of an autoimmune disease (e.g., SLE). Mortality in these cases is very high (up to 50%) despite aggressive therapy.

Laboratory Tests: APLA can be easily measured. Only IgG fraction (and not IgM or IgA) of APLA has clinical implications. 1% of the normal population and about 3% of older people are APLA positive. They do not require any treatment. IgG APLA of more than 40 is predictive of thrombosis. Beta-2 GP1 is an antibody to phospholipid-binding protein. It can also be measured and appears to be more specific in predicting thrombosis. Lupus anticoagulant test (LAc) measures the ability of APLA to interfere with blood clotting. LAc is also reported to be positive in the normal population. Higher levels are commonly associated with thrombosis. All these tests, though expensive, must be repeated after three months to confirm the diagnosis of APS.

A false-positive VDRL test (which tests syphilis infection) can also indicate APS. Platelet count is usually low in 25% cases and may cause bruising of the skin. Hemolytic anemia (destruction of red cells) can also occur. Prothrombin time is prolonged, whereas bleeding time and partial thromboplastin time are normal.

Treatment: Although there is no satisfactory treatment to suppress APLA, clotting tendency can be corrected using anticoagulant drugs such as low dose aspirin (75-100 mg/day) and warfarin or heparin. Dipyridamole can be used in patients who are intolerant to aspirin. Long-term anticoagulation with heparin (low molecular weight preferable though costlier) followed by warfarin is the treatment of choice in all major thrombotic events. Patients on anticoagulants must check blood regularly for INR (internationally normalized ratio). INR indicates thinning of the blood. INR should be maintained between 2 and 3, although a higher INR (3-4) is required in few critical cases. Newer anticoagulants (e.g., fondaparinux) can be used in patients who are intolerant to heparin. Anticoagulants can cause bleeding (which settles with vitamin K and temporary drug withdrawal) and bone loss (osteoporosis). All patients on anticoagulants must receive calcium and vitamin D.

Associated diseases such as SLE need to be treated with hydroxychloroquine, azathioprine, and other suitable drugs.

Although pregnancy in APS indicates high risk, a 90% live birth rate can be achieved with proper obstetric care and medical management.